Born in London, where she now lives, Rosemary Hill went to school in Surrey, to university in Cambridge and again, much later, in London. She was married for twenty-six years to the poet Christopher Logue until his death in 2011. She married the architectural historian Gavin Stamp (1948-2018) in April 2014.

‘I’m interested in the relationship between three-dimensional objects and abstract ideas. Why should a particular view of the human condition make chairs look a certain way? From the Shakers to Pugin, William Morris to the Bauhaus people have expressed their beliefs through material objects. And if you look the other way, from things to the ideas associated with them, you find people’s thoughts and beliefs are there in what they have made, collected or preserved.’ 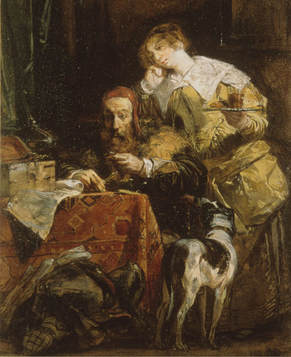 The Antiquary by Richard Parkes Bonington, c1827 (Wallace Collection)
CURRENT RESEARCH
My current research is on antiquarianism in the romantic period, from 1789-1851. These were the years that saw much of what we now mean by ‘history’ come into being. Social, local, oral and architectural history and the study of the Middle Ages were developed in the late Georgian and early Victorian decades largely by amateur antiquaries. Antiquaries were men (and very occasionally women) who were interested in the material remains of the past. They dug up ruins, deciphered manuscripts and studied old coins and armour. They were often seen as eccentrics or even magicians, but they pointed the way to modern historical practice.

The Romantic period also saw the rise of the historical novel and a new, dynamic relationship with the past which encouraged people to recreate it in architecture, painting and drama. This sometimes led to an elastic attitude towards the facts. Antiquaries were responsible for some of our most enduring misconceptions about the past. My book follows the careers of twenty or so across the spectrum from scrupulous scholarship to wild invention. It considers such questions as what was Keats’s Grecian urn made of, who put the arrow in King Harold’s eye and where do Druids come from. My subject is in part what Eric Hobsbawm called ‘the invention of tradition’, but while his purpose was to debunk mine is to ‘rebunk’ to see the history we have and those who made it as nearly as possible for what they are.